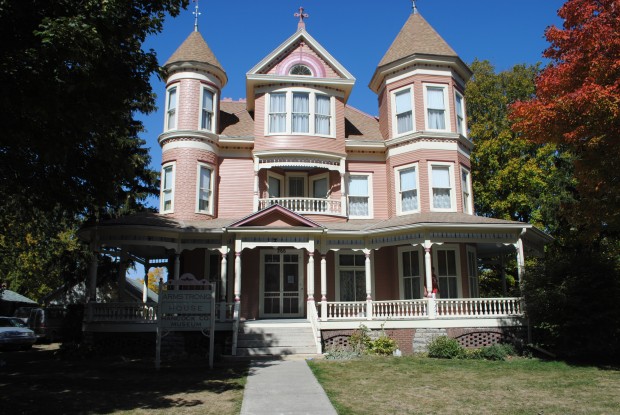 The Armstrong House in Britt, Iowa is a large Victorian house built in 1896 at a cost of $15,000 for Lewis Larson. The builder was John Victoria who built many of Britt’s early large buildings, both residential and commercial. Mr. Larson, a Norwegian immigrant, eventually settled in Britt to become the president of the newly organized First National Bank.
Legend is that Larson told his contractor that he wanted a bigger house than the one built nearby for a Britt merchant in 1892. And so it came to be. While the earlier house featured one tower, the new home would have two.

The Larson family arranged for Norwegian girls to immigrate to Iowa to work in the house. There were always two in service to do the domestic chores. These maids slept in a small bedroom at the back of the house. To facilitate their duties, a second stairway led from the kitchen to the second floor hallway, adjacent to the maids’ room. From the bathroom across the hall the stairs continued on to the attic. In this way, their duties could be performed unnoticed while the Larson’s entertained in the parlors. A butler’s pantry between the kitchen and the dining room eased the serving of the meals.

When H.C. Armstrong bought Mr. Larson’s interest in 1914, he also purchased the residence. The house remained in the Armstrong family until 1969 when it was presented to the Hancock County Historical Society for a museum. It is now furnished as much as possible with furniture and accessories from the late Victorian period. The house is a repository for antiques from the citizens of the county and for a collection of early memoirs and local history.

The large attic features a small replica of a rural school and a small country church.

TOURS
Tours are available only by appointment.  Group size must be 6 people or less to accommodate social distancing.  Admission is $5.00 per person in the group.

Make your utilities payments to the city of Britt using our easy online pay option. You may choose to pay immediately or set a pay schedule. Please use the “other” option to pay pool memberships, hall rental, parking violations, etc.

Make your utilities payments to the city of Britt using our easy online pay option. You may choose to pay immediately or set a pay schedule. Please use the “other” option to pay pool memberships, hall rental, parking violations, etc.